To understand Quaker tradition and practice, we have to think about the context in which it developed.

Quakerism began in the seventeenth century, when a man named George Fox, the son of a Leicestershire weaver in England, rebelled against the political and religious organisations at the time.

In England during the 1600s, there was a hierarchy of power where the religious leaders interpreted the bible for the ‘common people’. Fox believed that this was unfair. He had an epiphany that led him to believe God, or the divine, could speak directly to everyone – regardless of their political or religious status. And so, Fox began a new way of worshipping – one radically different from the current orthodox Christianity at the time. Fox’s worship was primarily silent without music, rituals or creeds. Through worshipping in this way with others, it was understood that you could listen to the inner light – that of the Holy Spirit – God.

Below is a diagram to help you understand the historical roots of Quakerism. 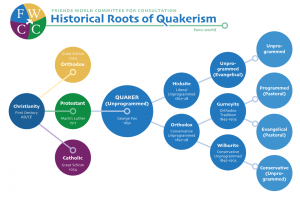 So how did Quakerism spread across the world from England? After spreading around the British Isles, many Quakers were persecuted for their faith as it was seen to go against the authority at the time. So fleeing for religious freedom, and away from persecution, many Quakers emigrated to the American Colonies, and with them went the Quaker faith.

However, Quaker faith is about people, and so when the early Quakers met other people in America, they also met other religions and cultures. And so as some Quakers moved further out towards the west of America, they moved with people of different religions and cultures. This led to the adaptation of the ‘typical’ silent Quaker worship, to a semi-programmed form of worship with scripture readings, and songs*. This is where pastoral Quakerism began.

In the mid-1800s, missionaries developed Quakerism in Africa and out towards the Philippines, Taiwan and Bolivia. Today the Africa Section of FWCC has the largest number of Quakers practising.

*To learn more about the specifics of programmed and unprogrammed worship, go to our glossary.